Okay so I decided to see if I could get my pizza crust thinner and maybe it would be a little less doughy in the center and cooked all the way through.

Regardless the last pizza still turned out amazing but here is the one with the new technique.

So this time what I did was put some cornmeal down on the cast iron skillet, once it started to smoke a little bit I put the dough on it to start cooking it before I put the ingredients on it. In this case I was going to put some fresh mozzarella cheese, bell pepper, onion, chicken breast that was cut up and marinated with some chicken tikka seasoning.

Once the crust reached what felt like its half way point of cooking I put on the pizza sauce, cheese and the rest of the toppings. I finished the pizza off with the broiler on for a couple of minutes (I also have the worlds weakest oven, once an omelet was left under it for 10 minutes and it did not burn the omelet. So you get the idea) 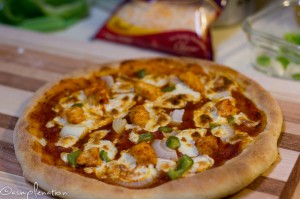 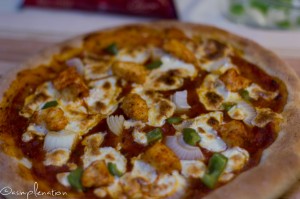